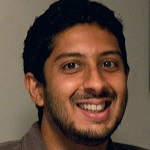 I first got interested in the brain after cutting one up in my first year at Med school. But I was blown away by how homogeneous it looked - firm, crumbly and yellow. Cognition didn't seem like that. The inside of a computer was nothing like that. I had expected something altogether more Byzantine. For me, that was it - I had to find out how that doughy pulp could create music, mathematics, literature, and love.

I studied eye movements with the late Roger Carpenter - "artiste extrarodinaire" - musician, neuroscientist and amazing mentor. He made it his trademark to hate psychology, and used to make fun of people who talked about attention. To his chagrin I moved swiftly on to the late Jon Driver's lab - another razor-sharp mind - who then introduced me to Masud. Between those three - I got hooked on cognitive neuroscience.

To me, the most exciting advances are new methods to understand high-dimensional recordings from many neurons.  Neurons, when connected together by synapses, fire in patterns that change over time. The brain's state can be thought of as a high-dimensional time-varying vector. When we decide to act, these changing patterns trace out specific trajectories in a state space.

One great paper shows that these neural state trajectories minimise "tangling" -- a topological measure of how resistant they are to noise. Another elegant study shows that when two similar variants of a task are performed, the trajectories follow distinct paths for each of the task variants,  but those paths are parallel shifts of one another when viewed from certain directions in state space. Moreover recurrent neural networks can generate trajectories that follow comparable kinematics.

The dynamical systems approach to cognitive processes is a beautiful way to understand how thoughts emerge from neurons.

Everyone is waiting for a neural network that can represent goals and how to obtain them -- then select appropriate actions for current needs. The algorithm is straightforward, but it's tricky to implement with biological neurons. But I think we're not far off from this -- and obviously this has striking implications for artificial intelligence as well as the neuroscience of motivation.

I'm a jazz pianist, countertenor and a choir director.  I also have many side-projects on computer programming, teaching software, and I'm writing a book on good coding.  But more recently my time's spent mainly as a dad.

I listen to a lot of Bach, Scriabin, and Bill Evans. I think they are the most mathematical composers?