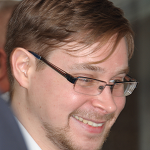 I remember quite distinctly the day in school when I learnt about these things called “neurons” for the first time. I was fascinated by the idea that these could be responsible for our thoughts and behaviours. I think at the time I was also sceptical that what I was being taught was true - surely it couldn’t be that simple?! In all the years I have spent learning and studying the brain since, I have been delighted to learn how right I was to be sceptical, and just how much there is still to learn about the links between brain and behaviour.

I always find it hard to pinpoint specific people who have inspired me, as I find the work of many people interesting - and it’s more the science that inspires me than the people! However, one major influence both before I moved to Oxford, and since I arrived here, is Prof. Matthew Rushworth. I suspect he may be embarrassed to read this but his thoughtful, thorough approach, and the questions he asked always had a significant appeal to me and drove the questions I asked in my PhD research and beyond. Similarly, Prof. Betsy Murray’s work at the NIH has also been a major source of inspiration - one of my proudest moments was being asked by her to provide comments on a book chapter she had written. I was a little in shock to be asked.

I have also worked with wonderful people each of whom I have learnt so much from, including Prof. Narender Ramnani and Prof. Manos Tsakiris at Royal Holloway and Prof. Masud Husain here in Oxford.

It is very hard to choose. There have been many great papers this year looking at the links between the willingness to exert effort, and the systems and neuromodulators in the brain that underlie motivation. However, one paper that really inspired a lot of ideas was that of Elston and Bilkey in Cell Reports. They recorded from the Anterior Cingulate Cortex and Ventral Tegmental Area as rodents traversed towards a goal, but were suddenly presented with either the presence of absence of a barrier requiring the exertion of effort. What was neat about this study was that it demonstrated a similar computational framework for the dynamics of value coding, regardless of whether we value something based on the probability of reaching the goal, or the effort that is required to obtain it.

I think a major breakthrough is needed, and will come, in our understanding of the neural mechanisms underlying fatigue in both healthy people and in disease. It is highly prevalent and a leading cause of quality of life impairments in many neurological conditions including Parkinson’s Disease, Chronic Fatigue Syndrome, Multiple Sclerosis and post-stroke. Yet, to date, an understanding of the mechanisms that underlie both its characteristic feeling of “exhaustion” and its underlying impact on motivation is - relative to many other conditions - poorly understood. In September, the Royal Society has organised a specialist workshop on fatigue drawing together researchers across a range of disciplines and conditions that will foster collaborations to really begin a multi-disciplinary approach to understanding its neural antecedents. I think this is promising, and taking such a trans-diagnostic approach may lead to a major breakthrough.

My main hobby is road cycling. Oxfordshire is so beautiful in summer and cycling for hours out in the rolling hills is wonderfully refreshing and energising. Aside from that, I have considerable expertise in cracking bad jokes and then regretting them, which is why our cat is named after an algorithm used in computational modelling (“SoftMax").

Film - Most of the Coen Brothers films; Book - “The Human Brain Atlas”, by Duvernoy et al. is not exactly a “page-turner”, but it is both beautiful and has been my favourite resource for anatomy for over a decade; Music - Indie music from the 2000-2008- after that I no longer had the time to keep up with what was hip with the kids!