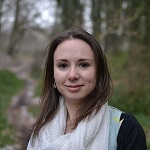 My passion for studying human vision began during my undergraduate degree in Physics. I chose a research project developing an instrument to investigate the imaging properties of the eye and how these impact vision. I became fascinated by the complexity and elegance of the visual system, and the sophisticated psychophysical methods for understanding it. There was something deeply satisfying about designing an experiment to collect reliable and repeatable measurements from the seemingly (to a physicist) unreliable human observer in a way that allowed very specific mechanisms in the visual system to be investigated.

I’ve been very lucky to have excellent and supportive role models throughout my career – most notably my PhD and postdoctoral supervisor, Prof Hannah Smithson, who has been very supportive over the years, and great source of optimism!

Recent advancements in the field are leading us towards the direct visualisation of the activity of photoreceptors in the retina in response to stimulation, in a living human – ‘seeing’ them ‘see’. This has really exciting prospects for characterising the neural wiring in the retina but also for understanding disease and sight restoration, using emerging techniques such as optogenetics and gene therapy.

I travel up to Durham to see my husband each weekend and we often go out into the countryside for a hike. We have a car that we’ve converted for camping in and have taken it on several adventures in the UK and Europe. Although I have less time for it now, I enjoy rock climbing and I also took up aerial silks and static trapeze a few years ago. Fortunately I’m not very good, so there’s no chance of me running off to join the circus!

I enjoy science fiction - the infinite possibilities that can be explored as well as the beautiful cinematography that is so often used. I don’t think I could name just one film; I enjoy everything from the dystopian Blade Runner (and of course the book on which it is based, “Do androids dream of electric sheep” by Philip K Dick) to the humorous The Martian, which also includes plenty of ‘nerdy’ science. Although not science fiction, I also really enjoyed The First Man, which tells the story leading up to Neil Armstrong landing on the moon and shows the human side of such dangerous, but significant, endeavours of exploration.