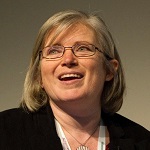 I can’t remember a time when I wasn’t interested in what makes people tick, what makes us unique, how we develop across our lifetimes through both health and disease. In that sense I’ve always been interested in the brain. I did a degree in psychology assuming it would be all about the brain, but in the early 90’s we were mostly taught about cognition as boxes and arrows. When we were given options for our final year projects there was one neuroimaging project on the list and as far as I was concerned it was the only one. My opportunity to look inside the brain had arrived. I fell in love and have never looked back.

I’m a people person but not a hero-worshiper, so there are loads and loads of people that inspire me: the most eminent and successful professors, my friends and colleagues, the patients and carers that I meet, the diligent students and post-docs who want to make a difference, the RA’s for whom nothing is too much trouble. I am particularly drawn to those who combine bravery and humility, including those who battle adversity in some way (internal or external), and those who dream big dreams and take on major challenges.

The real excitement in our field comes from the data explosion we are grappling with.  From an imaging perspective the definition of a ‘large’ study has gone from 100 -> 1000 -> 100,000 in the last decade. From a dementia research perspective we are just starting to explore the ways in which complex phenotyping from imaging, genomics, proteomics and cognition (etc) can be combined to produce an ‘individualised medicine’ approach to cognitive health. Alongside the proliferation of data is a growing momentum around ‘open-science’, which will improve the quality of scientific outputs, reduce costs, and accelerate clinical translation. We need an army of informaticians in the next generation – they will be the scientific super-heros of the next era.

Tell us about the outreach work you do

I am lucky that our field of science is automatically engaging for the public – you don’t meet many people who aren’t interested in what their brain looks like and how it works. I get a huge amount of enjoyment from talking to patient groups, members of the public and school children about what we do. A recent example was Curiosity Carnival; the whole of Oxford was transformed into a scientific engagement bazaar, complete with spectacular light shows on our iconic buildings. I played Franz Joseph Gall in the Wellcome Centre for Integrative Neuroimaging’s play ‘21st Century Phrenology’ at the Museum of Natural History. It was so much fun!

Mostly I hang out with my family in our lovely South Oxfordshire village. Our favourite adventures include snowy mountains, two wheels, and building elaborate sand castles (not all at the same time!). I recently took up running, which is an amazing tonic for mind and body. I’m also a governor at my son’s primary school, where I take a particular interest in science. I am keen to do my bit to encourage children’s natural curiosity and break the stereotype of a scientist that puts so many (particularly girls) off.

I’m not a huge music buff but occasionally a tune will grab me and not let me go. A recent example was Outro by M83, which became the anthem for our NIHR Oxford Health BRC interview last year. In a moment of madness I played it on my phone in the anti-room just before we were called in to face the panel. When I hear it now I still feel the tingle of excitement/terror… and I can still see the startled/horrified/amused look on Alastair Buchan’s face!