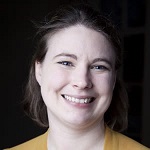 I was in a lecture in my second year at Medical School.  I remember very clearly the moment when the lecturer said that despite stroke being the commonest neurological disability we understood very little about how people recovered function afterwards.  I wanted to do something about that at the time.  Its either a lack of imagination, or sheer determination, that means that nearly 20 years later I still do.

I’ve been really lucky to be surrounded by amazing people throughout my career, and have been particularly fortunate to work with so many fantastic senior women in Oxford.  In terms of pure science, John Rothwell at UCL does beautiful, elegant science and has a profound knowledge of his field that I hope one day I can emulate.  But mostly I wouldn’t be here without Heidi Johansen-Berg, who has always inspired me by her ability to do truly excellent science and to maintain a friendly and supportive lab while having a young family.

I’ve only recently come across the work of Takaki Komiyama at UCSD, who is doing frankly amazing work in animal models of motor learning and I’ve been thinking about the recent paper from his group (Peters et al., Nat Neurosci 2017) a lot in recent weeks.  In terms of human imaging, I love the recent work from Nici Wenderoth’s lab, particularly Bachinger et al., J Neurosci 2017.

We’re almost there, but I think its going to be through harnessing technologies such as optogenetics and direct cortical recordings to investigate the role of inhibitory neurons in local and network-level connectivity changes with learning of motor skills.  It feels like we’re tantalisingly close to understanding the relationships between local and network activity.

Goodness.  I read a lot, but probably An Equal Music by Vikram Seth.  Though I have to mention The Handmaid’s Tale (Margaret Atwood) and The Wizard of Earthsea trilogy by Ursula Le Guin, both of which I read at an impressionable age and changed the way I look at the world.