Professor of Neurophysiology and Director of the Centre for Integrative Neuroscience 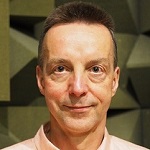 As a teenager, I sometimes listened to the BBC Reith lectures on the radio. In 1976, the lectures were given by Colin Blakemore on the “Mechanics of the Mind”. They were an inspiring mix of science, history and philosophy. I was intrigued by the challenge posed by the brain attempting to understand itself, and promptly bought the accompanying book. I imagine I would have gone into neuroscience at that stage, but I don’t think there were any undergraduate degrees in this at the time and I did physiology instead. Again, a really good series of undergraduate lectures led me toward the senses, which is what I’ve ended up focusing on.

Lots of people at different times, from Colin Blakemore onwards. I think I was also strongly influenced by the late Peter Baker, who was head of the Physiology Department at King’s College London, where I did my undergraduate degree. Since then, I have interacted with many inspiring people, who stand out not only for the quality of their science, but also their ability to communicate their ideas.

This is difficult to say since it generally takes longer for the true impact of papers to become apparent. My research also covers quite a wide range of topics and methods, so I don’t think it’s possible to pick out a single key paper. However, a major area of interest in my lab is spatial hearing, and I think the study published by Eli Nelken’s group in PNAS in 2016 showing that vestibular and proprioceptive inputs to neurons in the dorsal cochlear nucleus allow body and sound source movement to be differentiated is pretty cool. I also can’t resist mentioning the very recent Nature paper by Han et al. showing that individual neurons in primary visual cortex are connected to specific subsets of targets areas. This illustrates that cutting-edge anatomy (in this case, combined with high-throughput DNA sequencing of genetically barcoded neurons) is still really important. Two of the authors are also former DPhil students of mine.

As with many aspects of neuroscience, the application of methods for monitoring and manipulating the activity of populations of individual neurons is key, along with quantitative studies of behaviour. As far as the auditory system is concerned, the big question is how we listen to sounds in real-world situations. Unravelling the neural computations and circuit architecture responsible for auditory perception in dynamic sensory environments is now a goal of many labs.

I like to cook and – most of the time – enjoy working on my rather challenging garden, which is part of a former quarry and therefore very steep. Travelling, particularly when a conference or lecture isn’t involved, also takes up a fair bit of my time.

I have pretty eclectic tastes in all three. I’m struggling to pick out a favourite movie, though It’s a Wonderful Life would be near the top of the list. As far as books go, I recently finished Machiavelli’s The Prince (read into that what you will) and am about to reread Alan Bennett’s delightful The Uncommon Reader. My musical tastes range from Tallis via Purcell to Philip Glass. One of the great things about being in Oxford, and particularly at a college with a strong musical reputation, is the opportunity to listen to early Renaissance and Baroque music on a regular basis.