A new study from the Department of Pharmacology sheds light on the link between the two major Alzheimer's disease pathologies.

It has been known for many years now that Alzheimer’s disease is triggered by the build-up of a small protein called amyloid-beta (Aβ), which is the major constituent of the pathological amyloid plaques that characterize the neuropathology of Alzheimer’s. The dominant hypothesis for how this trigger causes the disease itself, the amyloid cascade hypothesis, suggests that Aβ initiates a sequence of events that includes, critically, chemical alteration by excessive addition of phosphate groups (hyperphosphorylation) to the protein tau, itself a key component of Alzheimer’s neuropathology as neurofibrillary tangles. Only once this has happened, it is thought, will the full manifestations of the disease ensue. Exactly how Aβ might trigger the recruitment and hyperphosphorylation of tau has, however, remained unclear. 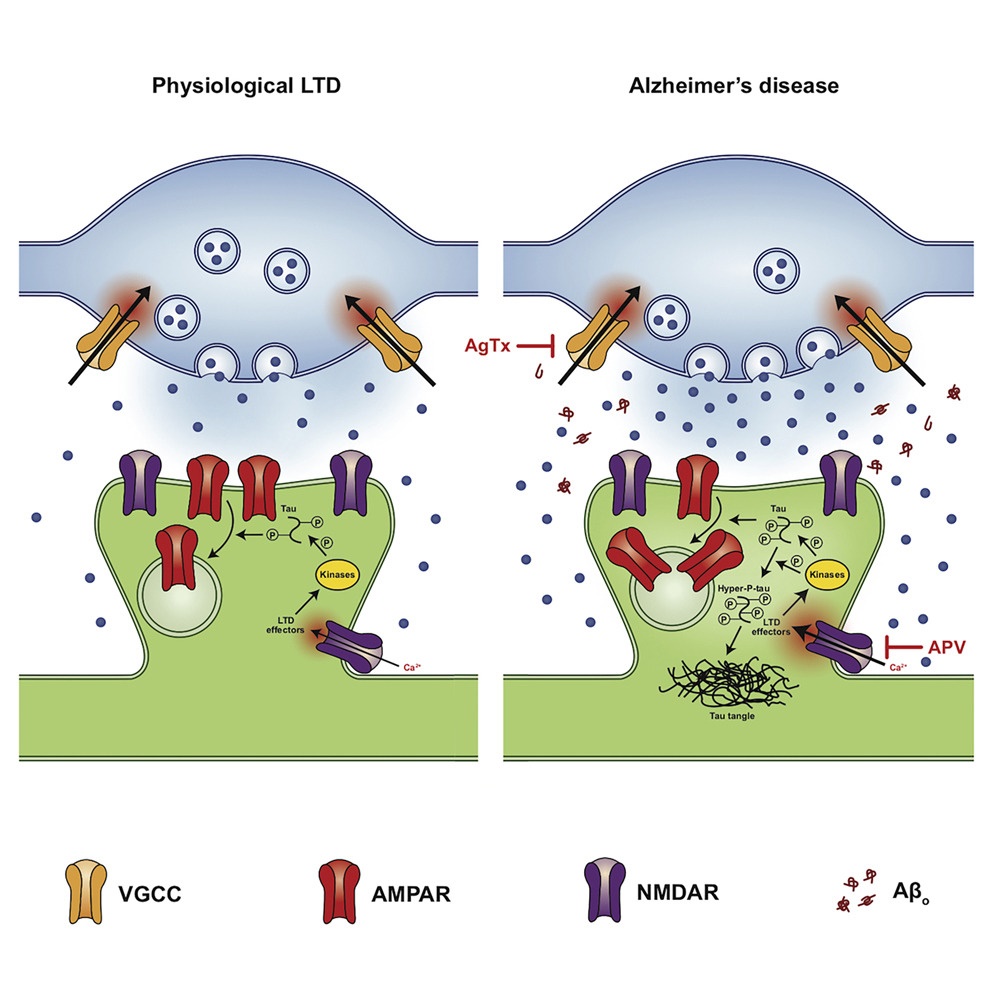 A new study from the Department of Pharmacology led by Dr. Alexander Jeans and Professor Nigel Emptage now sheds light on this process. Using slices from the rodent hippocampus, a brain region particularly vulnerable to Alzheimer’s pathology, the researchers found that application of the Aβ protein caused an increase in the amount of the neurotransmitter glutamate that neurons released, which in turn caused an abnormal enhancement of a physiological process called long-term depression (LTD) that regulates the strength of synaptic connections between neurons. LTD has previously been shown to require the tau protein, to which it normally causes the addition of phosphate groups at just two distinct sites.  Taylor et al. showed that either following exposure to Aβ, or following the induction of abnormally enhanced long-term depression alone, tau underwent an excessive hyperphosphorylation just as it does in Alzheimer’s disease.  Together, the data support a new mechanistic model linking Aβ to tau, wherein Aβ increases neurotransmitter release, enhancing synaptic long-term depression which in turn drives the pathological tau hyperphosphorylation necessary for the full expression of Alzheimer’s disease.

Not only does this study fill an important gap in our understanding of the molecular mechanisms of Alzheimer’s disease development, it also throws up interesting new potential therapeutic possibilities that might be exploited in the future. In particular, inhibition of the enzymes responsible for the excessive addition of phosphate groups to tau during enhanced long-term depression may be beneficial, as may inhibition of the particular type of synaptic glutamate receptors associated with the induction of long-term depression itself.

Oxford pain researchers are playing a major role in a new multi-million pound research programme launched by a consortium of funders, including UKRI, Versus Arthritis, Eli Lilly and the Medical Research Foundation.

The only project of its kind anywhere that studies patients with all types of acute vascular events - including strokes, heart attacks, aneurysms - in order to develop better diagnostic tests and treatments celebrates its 20th anniversary this month.

Little understood brain region linked to how we perceive pain

A new review paper, published in the journal Brain, has shown that a poorly understood region of the brain called the claustrum may play an important role in how we experience pain.