The winners of our annual Neuroscience image competition

The winners of the 2019 BRAINScapes Image competion were announced at the Oxford Neuroscience Symposium on the 20th March.

Many types of sensory nerve exist, allowing us to sense the world around us. This image colour-codes the different nerves responsible for detecting touch, temperature and pain. Red nerves detect noxious stimuli and initiate the experience of pain, while green nerves detect non-painful sensations such as touch. 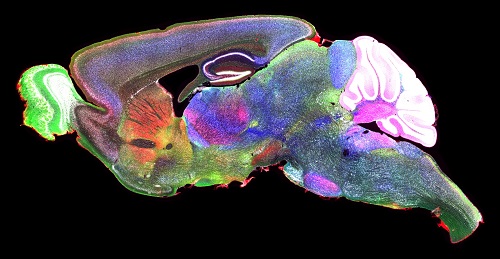 Here we show a slice of the mouse brain in a riot of colours. Different colours are used to detect special proteins and nucleic acid (Nissl staining) to highlight the diversity in brain structure at great detail. How many structures can you recognize?

This is an image of a parasagittal section of the mouse brain fluorescently labelled for anti-calretinin (green), anti-calbindin (red), and anti-parvalbumin (blue) as well as Nissl staining (white). Nissl staining has a long history of being used for studying the cytoarchitecture of the brain and considered a basis of neuroanatomy.

Calretinin, calbindin, and parvalbumin are all calcium-binding proteins and specific antibodies against them have been used to visualize the chemoarchitecture of the brain and used to delineate structures that are difficult to be identified on the basis of cytoarchitecture alone. In this sub-micron resolution image (with more than 300 million pixels by 4 channels; 0.641 µm in tissue per pixel), you can recognize individual cell bodies and even some dendrites. This is a subset of the data deposited on our CHAMBER website (CHemoarchitectonic Atlas of the Mouse thalamus as a BNDU opEn Resource), which are now publicly available to facilitate precise delineation of brain structures (https://data.mrc.ox.ac.uk/chamber). 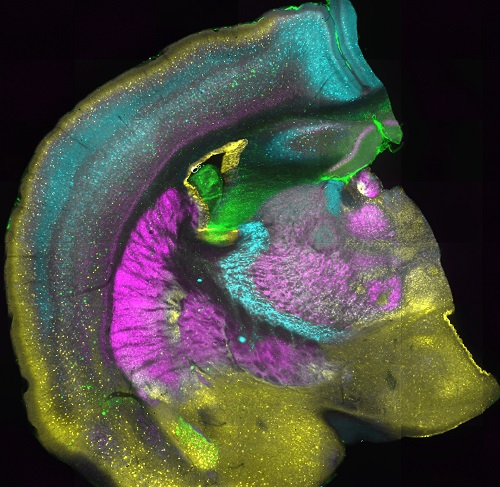 Near the centre of the human brain you will find a walnut-sized structure called the thalamus, or chamber, named by Galen of Pergamum. It acts as a ‘gateway’ for messages concerning sensation, action and memory. In this image of part of the mouse brain; the thalamus is in the middle.

Coronal brain section (one hemisphere) from an aged genetically-altered mouse showing immunoreactivity to parvalbumin (cyan), calbindin (yellow), Purkinje cell protein 4 (magenta) and phospho-tau (green). The mouse has been engineered to express human mutant tau protein to mimic some aspects of human tauopathies such as Alzheimer’s disease. Prominent features include the layers of the cortex, the thalamus, the reticular nucleus, and striatum. With this combination of molecular markers, different nuclei of the thalamus are revealed, and each has different connectivity with various cortical and subcortical brain regions.