The winners of the BRAINScapes 2020 Image competition have been announced. The standard was very high and in the circumstances we decided to award a few more prizes than usual.

Mammalian brains contain stem cells that continue to generate nerve cells throughout life. This image shows a single stem cell-derived neurosphere that has generated nerve cells (white) and support cells (green and red). The Szele group use these cells to discover mechanisms and stimulate repair.

This neurosphere demonstrates the key criteria for stem-ness, self-renewal and multipotency. It was grown by Eun-Hyuk Chang (Szele DPhil) who used confocal microscopy and antibodies for Dcx (white neurons), GFAP (green astrocytes) and Olig2 (red oligodendrocytes).

Microglia (green) are considered the gardeners of the neuronal connections. They eliminate connections between neurons according their activity. I used genetic methods to silence the communications of layer 5 neurons (red) in the mouse cerebral cortex and observed a very strong change in microglia activity locally and in target regions.

I study the changes in microglia distribution and function after ‘silencing’ a selected population of neurons in the cerebral cortex. I study the affected synapses of the cortical layer 5 projection neurons (red color) and investigate the molecular pathway of fractalkine signaling in activity-dependent maturation of neuronal connectivity through synaptic pruning by microglia. I used a conditional Snap25 KO mouse line (Rbp4cre/cre;Snap25fl/fl)1 where a selected population of cortical layer 5 projection neurons lack the ability to release synaptic vesicles in a regulated fashion from stages starting before birth and assessed how synaptic ‘silencing’ affects neuron-microglia interactions. Microglial cells density was increased in visual cortex and layer 5 in a gender specific manner suggesting that microglia specifically interact with these ‘silenced’ layer 5 neurons and their processes. Since autism is linked to synapse elimination and autism shows gender differences, my findings put the searchlight on the molecular nature of these interactions.

RUNNER UP £50 AMAZON VOUCHER "Our world is in grayscale" BY Robert Lees dEPT OF PHYSIOLOGY, ANATOMY AND GENETICS

Our state-of-the-art microscopes use scanning lasers to construct images of living brains. Simultaneously, we use another laser to activate brain cells and monitor the changes in brain activity seen in the images. At this scale, colour has no meaning, our world is in grayscale.

Two of Bruker’s 2P Plus two-photon dual-path laser-scanning microscopes each equipped with a Boulder Nonlinear System 512 x 512 spatial light modulator (SLM) allowing simultaneous two-photon calcium imaging and optogenetics in awake mice. Installed in the lab of Adam Packer on the third floor of the Sherrington Building.

These heat-maps show differences in gaze density when focusing attention to memorised visual representations that once occupied the left or right of fixation. Data are t-contrasted to get the 'sun-flare' effect. This gaze-bias effect
reveals that the brains oculomuotor system is involved in attentional shifts even in memorised visual space.

Brain areas that control gaze are also recruited for covert shifts of spatial attention. In the external space of perception, there is a natural ecological link between the control of gaze and spatial attention, as information sampled at covertly attended locations can inform where to look next. Attention can also be directed internally to representations held within the spatial layout of visual working memory. In such cases, the incentive for using attention to direct gaze disappears, as there are no external targets to scan. We investigated whether the brain's oculomotor system also participates in attention focusing within the internal space of memory. Paradoxically, we revealed this participation through gaze behaviour itself. We demonstrated that selecting an item from visual working memory biases gaze (micro-saccades) in the direction of the memorised location of that item, despite there being nothing to look at and location memory never explicitly being probed.
These heat-maps show this 'gaze bias', by showing the difference in gaze position following cues that direct attention to internal visual representations that had occupied the left or right of fixation when previously encoded into visual working memory. 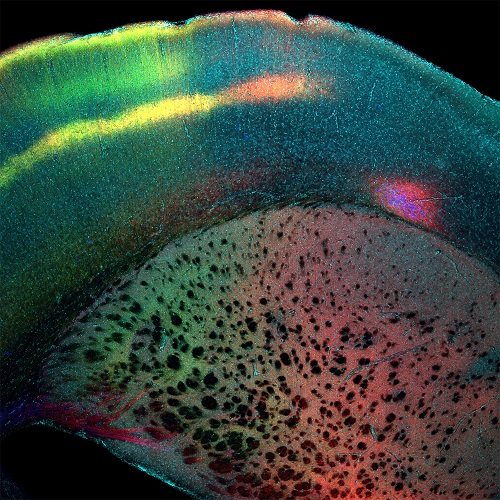 The claustrum lies at the centre of a complex network joining cognitive, sensory, and motor regions of the brain. Imaged here are projections from different regions that converge onto the claustrum (blue cells). Claustrum connectivity has inspired many hypotheses as to its function, including a role in consciousness.

This image displays the use of virally encoded light-sensitive opsin proteins in tandem with retrograde fluorescent tracers as a method for visualising and controlling cells with light in vitro. In red are red-light-sensitive opsins fused to tdTomato that express in the axons of infected neurons of the medial prefrontal cortex. In green are blue-light-sensitive opsins fused to GFP that express in the axons of infected neurons of the primary motor cortex. Cells from both regions project strongly to the striatum (left), somatosensory cortex (upper right) and, notably, the claustrum (bottom), labelled in blue with the retrograde tracer CTB-647 injected into the retrosplenial cortex. In this experiment, the activity of individual claustrum cells was recorded in vitro using whole-cell patch-clamp and manipulated with light by optogenetic photostimulation of opsin-expressing axons in the claustrum. Cell nuclei labelled with DAPI (cyan).