Brain Awareness Week is an annual global initiative designed to raise awareness among the public about brain-related research and the impact that neuroscientists are having on the world.

This year, our researchers were involved in several activities, each with a different target audience in mind:

This project is run by neuroscientist Chrystalina Antoniades and Public Engagement Manager Jacqueline Pumphrey. This work is based on the Oxford Quantification Study (OxQUIP). It is part of a continuing collaboration on art and neuroscience with Dr Jim Harris, Teaching Curator at the Ashmolean Museum.

The project brings together artists, patients and neuroscientists to bridge the gap between objective research into Parkinson’s Disease and people’s lived experience of the condition. For the inaugural event during Brain Awareness Week, the team joined up with artist Yejeong Mutter to explore ways of thinking about Parkinson’s through a performance of 3D art.

The Learning Brain: Should you cram?

Holly Bridge and Stuart Clare from the Wellcome Centre for Integrative Neuroimaing designed a fun game to play on your phone, which tested whether cramming is successful, or whether learning something over a longer period of time produces a better outcome. Participants were chosen either to take part in the quick learning, which is done in a single day, or for a week of learning, where you play the game every day.

In partnership with Oxford Sparks we produced three Facebook Lives:

There was also a Twitter Takeover by one of NDCN's Public Enagement Ambassadors, Connor Scott, and Medium articles by colleagues in the Department of Experimental Pscyhology, Nadescha Trudel and Maximilian Scheuplein. Over 2000 people visited the microsite which pulled all the material together.

A large number of researchers from our Wellcome Centre for Integrative Neuroimaging were  involved in delivering another Big Brain Roadshow. This time the show went to Cherwell School, where we entertained 270 children with our play ‘21st Century Phrenology’ and interactive stalls on different aspects of our research, including the physics of imaging, the learning brain and the active brain. Our researchers worked really hard to make their science highly engaging, and they also gave the students a rich insight into life in science.

The children were very engaged and when asked to comment on what they thought of the activity, one student said: 'I loved all of it, it was sick!'

Clare Mackay organised a stall for the STEM day at Hagbourne School in East Hagbourne. Her team of really enthusiastic engagers, most of them first timers, engaged with around 200 children. They played brain snap with the children, taught them about brain evolution with 3D brains and stuffed animals, and enthused them about brain plasticity with Suzie Scientist. The day was a great success! 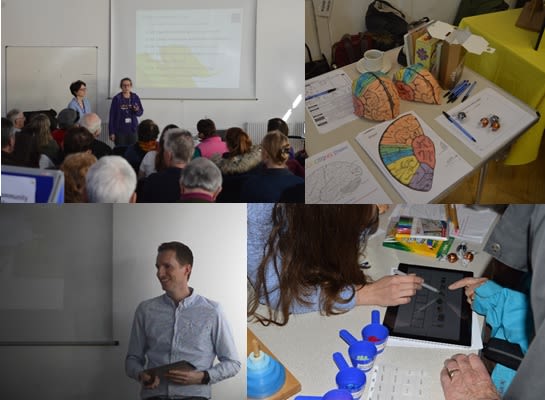 On Saturday 9 March, together with local branches of the Stroke Association as well as local charities and care providers, the Translational Neuropsychology Group hosted a packed audience of members of the public eager to learn more about stroke and acquired brain injury (ABI) research and care.

Visitors had the opportunity to learn about the wide variety of research that goes on at the University of Oxford looking at the psychological and behavioural impact of stroke and ABI and quiz researchers on their area of study. As well as looking at the techniques employed when studying survivors and patients in order to to further our understanding of the brain and cognition, visitors also learned, and had some hands-on experience of the innovative techniques being developed in the department that exploit the brain’s learning abilities to support rehabilitation after a stroke or ABI.

A highlight of the day was a stirring talk from Richard Raynor, a 38 year-old stroke survivor living with aphasia, who gave a captivating talk detailing his stroke experiences, from the immediate moments after his stroke, his care journey to how he has become an invaluable contributor to research in the Translational Neuropsychology group.

Betina Ip, a Royal Society Dorothy Hodgkin Research Fellow, has written a book for children: The Usborne Book of the Brain

A new workshop aimed at young people to inspire them to learn more about the science of the brain has been designed as part of a large Wellcome Trust funded research programme.

On 27 July, 16 girls aged between 11-14 joined the SHElock team from the Wellcome Centre for Integrative Neuroimaging.

Robin Dunbar and his Life Scientific

Prof Robin Dunbar, Emeritus Professor of Evolutionary Psychology has been in conversation with Jim Al-Khalili on Radio 4's Life Scientific. This fascinating podcast gives takes us on a journey from his early beginnings in science, and his fascinating research and groundbreaking discoveries he's made deciphering the mysteries as to why humans and animals evolve the social habits to exist in friendship circles.