An estimated one in three people report regular sleep complaints. So it’s hardly surprising people are more concerned than ever about getting enough sleep. This blossoming interest has seen an explosion of sleep trackers which measure how many hours of sleep you get each night. But these devices may not be as accurate or useful as they claim.

As we sleep, we go through cycles of “deep”, “light” and “rapid eye movement” (REM) sleep. The “deep” portion of our sleep is mainly what leaves us feeling refreshed the next day. Most sleep trackers are a watch worn on the wrist, and work by monitoring your body movements as you sleep to determine how much time you probably spent awake versus asleep. Some devices also look at heart rate changes during sleeping to estimate how much time you spent in each sleep cycle.

Despite their popularity, only a few studies have investigated how accurate sleep devices are. So far, research has found that compared to polysomnography tests – which experts use to diagnose sleep disorders – sleep trackers are only accurate 78% of the time when identifying sleep versus wakefulness. This accuracy drops to around 38% when estimating how long it took participants to fall asleep.

Polysomnography tests are the most accurate because they track a person’s brain waves, heart rate, breathing, blood oxygen levels, and body and eye movements during sleep through electrodes attached to the skin and scalp. Analysing brain wave patterns is the only definitive way of knowing whether someone is awake or asleep, and to know what stage of sleep they’re in.

But since sleep trackers are worn on the wrist, they make their estimates of nightly sleep by measuring body movement and sometimes heart rate data. As we move frequently during all stages of sleep, movement provides few clues about what sleep stage we’re in. Many sleep devices also fail to differentiate one stage of sleep from another based on motion alone.

Given many consumer sleep devices haven’t been compared against polysomnography tests, it’s difficult to determine their accuracy rate. Furthermore, the algorithms which companies use to make predictions about sleep are unknown, making it difficult for scientists to identify whether the assumptions made by the sleep devices are valid.

Watches that incorporate heart rate data tend to be slightly more accurate when measuring sleep duration because heart rate fluctuates during different sleep stages. However, even in devices that do track heart rate, many experts are still uncertain of their accuracy because of the limited research on them, and because of the differences between each device. For example, one study of heart rate sleep trackers showed that two consumer devices tended to underestimate the amount of deep sleep wearers obtained by as much as 46 minutes.

Ultimately, this leads to the question of whether knowing about our sleep is actually beneficial to us. After all, one of the best ways to stay awake is to try really hard to go to sleep. It sounds counterintuitive, but we see this clinically in patients with chronic insomnia, for whom excessive pre-occupation with sleep causes anxiety and low mood over sleep loss – leading to further sleeplessness. 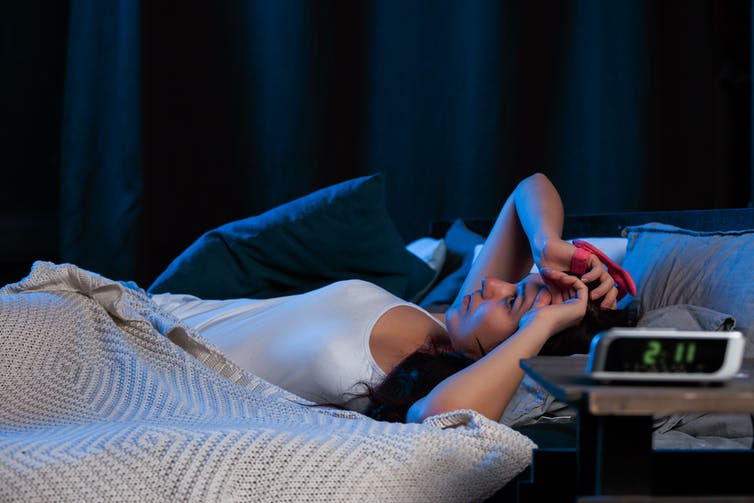 Knowing how much – or little – sleep we got could cause anxiety. Sergey Mironov/ Shutterstock

A study published by our research group showed this effect can be worsened by sleep watches. Participants were given sleep watches and asked to complete measures of mood, daytime thinking processes and sleepiness at regular periods throughout the day. However, the “sleep score” given by their watches was manipulated to show either an increased or a decreased quality of sleep. The amount and quality of sleep participants in both groups got was the same.

This shows us that data from these sleep trackers could change your emotional state and concentration levels during the day – even if the readings are accurate. Given people who experience poor sleep may be more likely to use sleep tracking devices, this could be a concern as it may potentially worsen mental health issues.

While few studies have examined this link so far, one report highlighted more patients are seeking treatment for perceived sleep difficulties as a result of feedback from sleep trackers. Even when such complaints are refuted by a polysomnography test, watches continue to provide a source of sleep-related anxiety. Since studies have shown overuse of wearable devices (such as those used during exercise) increase health anxiety and depression, there’s concerns sleep devices may have a similar effect.

While sleep devices might be useful for those who have generally good sleep but are interested in tracking or establishing a better routine, people who have poor sleep or mental health conditions may want to avoid them. But the best metric for measuring how good your sleep was is to see how you feel each day. If you’re tired and struggling to concentrate, then going to bed a bit earlier each night may help you feel more rested – no device necessary.

This article is republished from The Conversation under a Creative Commons license. Read the original article.

Professor Russell Foster has written a new book about circadian neuroscience which is published by Penguin this week. This book review by Jacqueline Pumphrey was first published on the University of Oxford website.

Hundreds of thousands of people suffering from insomnia who would usually be prescribed sleeping pills could be offered an app-based treatment programme instead, NICE has said.

Oxford pain researchers are playing a major role in a new multi-million pound research programme launched by a consortium of funders, including UKRI, Versus Arthritis, Eli Lilly and the Medical Research Foundation.